The History of the Concertina

Two row, 3 ¾, four row, five row and 6 row. “Boerekonsertina”, Wheatstone, Anglo-German and Havil (Hannes Viljoen concertina). You may have heard of these familiar names from musicians who play the concertina instrument in your home country or locally in South Africa known as “Boeremusikante” and some names of this instrument might be unfamiliar to you. Join me on a journey around the insightful and informative world of the concertina instrument.

Concertinas are classified as a free reed instrument or free airflow (to be more plainly). Under the class of Free Reed instruments: you will find other instruments such as the accordion, bandoneon and harmonica along with other types of instruments that might be less well known to you. When you press the buttons on the concertina and apply a “draw or push’ action you will notice that air free flows via suction or pressed movement at the side panels of the concertina as you make use of it.

The concertina is a unique and interesting instrument and can be used in a variety of music genres. Its idea derives from the mouth harmonica due to musicians who either are affected by age or illness that they cannot draw in enough air to blow into the mouth-harmonica’s flutes so they designed the concertina that works with your hands. As your hands do the draw and push action to let wind free flow in or out to produce the sound of the buttons pressed. Each button from left to right produces a different sound when you draw or push the concertina. Just like we have 12 keys in music you get your different keys that you play with a concertina, a two row concertina only has for example 2 keys (G/C A/D C/F D/G Eb/Bb) that you can play on. It is recommended for beginners who want to explore this instrument. The bigger rows such as the 3 ¾, 5 and 6 row have more notes that produce all the keys you will find on a piano, namely 36 black keys and 52 white keys.

This concertina is very popular amongst South African Folk musicians. The original model is known as an Anglo-German or Schöler. The new model Boerekonsertina that looks entirely different is made locally in South Africa by Danie Labuschagne that has a more Country/ Farmer like appearance to it. They are available in 5 keys namely: G/C; A/D; C/F; D/G; Eb/Bb

Below is the new model “Boere- concertina”

First Picture: the inside of the buttons and arm mechanisms

Second Picture: the flute casings you find on the left and right hand side of the concertina 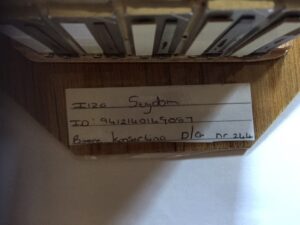 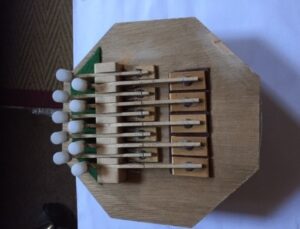 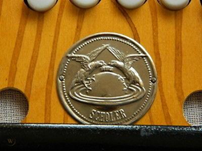 3 and 4 are the outside of the Boere- concertina overall 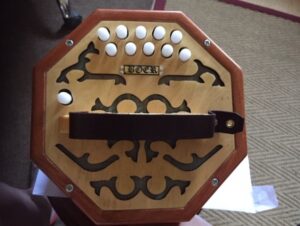 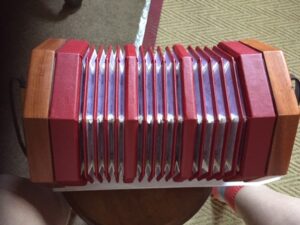 In English we talk about the ‘20- button of 30-button Anglo Concertinas” that implies the total number of buttons you will find on both sides of the concertina. The famous brand is of course Wheatstone. Especially the 3 ¾ Wheatstone concertina that is played and owned by musicians or collectors around the world. 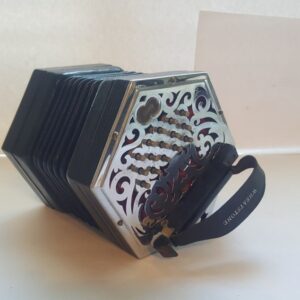 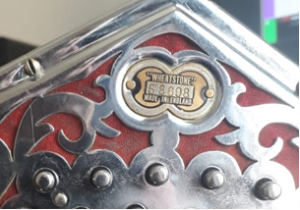 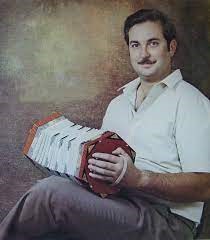 Notice the musicians hand placement. For all the concertinas your hand is placed fully inside the straps except for your thumbs.

It is only the four- row concertina that is held differently.

The four row concertina is very unique and rare. The notes on this peculiar instrument are played across’ each other (or diagonally) which makes it a very rare and difficult instrument to master as the notes on both sides sound exactly the same when you apply the draw/ push action. Unlike the other concertinas you do not have a strap that bridges across the back of your hand instead you have a small folded leather strap for your thumb and the front side a small metal bend to put your little finger in, in that way you only play with your 3 fingers in the middle of your hands on both sides. The purpose for this concertina type is to play fast notes and chords. 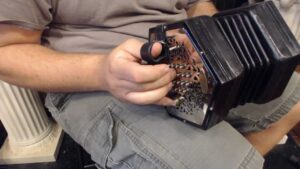 Left is a four row concertina

Right: Notice how the player positions his hands. It is the only concertina held in this position.

The five-row concertina is not that different compared to the 2, 3 and 6 row-concertinas. It is also a very rare concertina and allows you to play in more different keys. 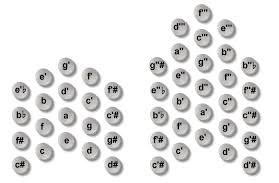 Left; An example of a five- row concertina.

Right; the different key locations you will find in the buttons to play with.

The 6-row Duet known as a McCann Duet concertina is more famous internationally than in local South Africa although we have a few local musicians who have mastered this instrument. This concertina is made up of an English concertina (3 ¾ Wheatstone for example) and an Anglo-Chromatic (2-row concertina) which provides the player with a wide range and variety of sounds and melodic choices. 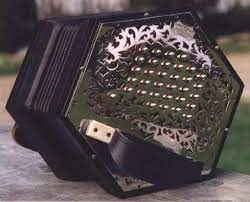 Right: They key location layout on the concertina

I do hope you have enjoyed this article about the concertina instrument. Do feel free to visit the links on the last page to read more detail about the brand names further.