The accordionist for all. Interviewing the Italian Accordionist Giancarlo Caporilli on 7 April 2013.

Giancarlo Caporilli started to study music and accordion when he was 4 thanks to his guide M° Fernando Chierici. So at the primary school, without knowing the alphabet yet, he was able to read music and solmisate. Caporilli focused on instrumental technique, harmony and composition with Silvio Aureli and at 14 started cutting records with him.
He has composed about 300 pieces for soloists and accordion orchestras cooperating with several publishers both in Italy and abroad. Giancarlo Caporilli performed for many years with his accordion in Italy and all over the world without electronic devices. His compositions, together with the most famous composers, represent his repertoire, strictly played by memory. 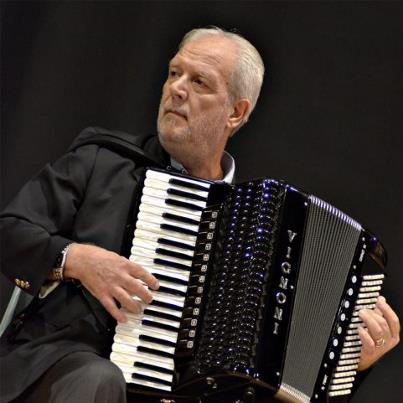 1. Hundreds concerts all over the world, among England, Switzerland, Scotland, Spain, France, where today you are known as “the accordionist for everyone”. Could you tell us the history of this expression?

Many years ago a journalist of a famous Italian newspaper was listening to one of my concert at the Auditorium Augustinianum in Rome. I was the first accordionist playing there because that theatre used to host performances of “nobler” instruments. So I prepared a particular repertoire. I was used to play acoustic instrument but I decided to use a electronic accordion on that special occasion in order to impress the audience with singular sounds. When I was a young student, my patient teacher Silvio Aureli realized in teaching me some classics adapted to the accordion so that, at the concert, I played Poeta e Contadino, Il Barbiere di Siviglia, La Gazza Ladra, Semiramide ending with Rapsodia n°2 by Listz. The audience loved this repertoire very much and in the backstage the journalist told me to be a great fan of accordion. He embraced me with many compliments.

Some months later I met the same journalist in a jazz musical centre where I was playing acoustic with a quartet of friends who used to play that kind of music. The journalist hardly recognised me.

I have meet him again during a party in Gerano, a small town near Rome. He athletically jumped on the stage while I was playing popular music in front of a square full of dancing people. He forced me to stop playing, do not worry about dancers, just to tell me he had a small house there and to ask for my permission to publish an article describing me as “an accordionist for everyone”!

2. From classical to light music, from symphony to liturgical style, from pop to jazz. Where can we found your origins and what is your perfect style?

My musical origins are classical but I have always been careful not to focus just on them. I have stubbornly looked for larger musical horizons in order to have much more occasions in life. I believe that audience is not homogeneous and time is proving that I’m right.

3. You have performed in so many events, playing different styles in front of accordion lovers as well as of a not passionate audience. You have accompanied singers of every kind. Do you think the accordion is properly responding to the developing recording industry?

The accordion has always been a charming instrument and I like playing every kind of music. A simple evening with friends can easily turn into a source of happiness and experiences. I have been experiencing lots of these positive moments with several pop or lyric singers for many years. Accompanying them on the accordion creates a special and original atmosphere able to astonish people used to much more celebrated instruments.
Today the accordion is quite well integrated inside several bands. I like ball dance, jazz, ethnic or folk situations, while I’m skeptic about rock or metal groups where the accordion seems to be a mere attraction instrument.

4. Your compositions are included in the programs of several National and International accordion competitions where you are often the Jury President. Today what are the main differences between Italian and foreign competitions?

In my opinion the accordion competitions are always an opportunity to face different situations and people because you won’t develop your musical qualities staying at home! Musicians frequently fail but I think this is often due to teachers who create false illusions and don’t teach them to compete showing a large humility.

Some foreign competitions are focused on spectacular elements and I like it very much but I have never found considerable differences with Italian contests.

5. People appreciate very much your style and compositions. English, Dutch, Swiss, Scottish, Canadian, as well as Italian, festivals and events call you every year as a special guest together with the most famous accordionists in the world. Could you tell us one of your nicest memory abroad?

My funniest experience was in Montreal some years ago. The theatre was full and many Italians were present. At the end of the concert the audience called for an encore. 20 minutes later, fascinated by such enthusiasm I asked the audience for some specific requests. I played traditional Italian light songs for one hour; from Rome to Milan, from Naples to Syracuse. That was an unforgettable concert, full of satisfaction and amusement.

6. Has you betrayed the accordion?

7. What are you next performances?

In April I will have 3 concerts in Rome. On 20th April I will receive the “Giovanni Pierluigi da Palestrina” International prize in Palestrina, near Rome, together with other very popular artists. Finally I will be in Blackpool, in England, in May.