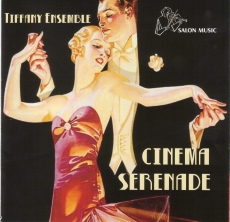 It is possible that Salon Music might produce a more beautiful CD in future, I just can’t imagine how…

Cinema Serenade features 18 exquisite items from famous and not-so-famous films. Some of the music is well known, but I never knew that it came from, or was used in a movie. One such example is Fascination. I knew the tune, but did not know about a film called Fascination.

The hit music items are from old films (golden oldies) like Escape to Happiness and newer films such as Runaway Bride.

Willem Vogel has made a name for himself over and over again over three decades, as an outstanding arranger of music of several genres, for small ensemble. His output of such arrangements is bountiful. He can only be admired – not only for the arrangements themselves, but for conceptualising so many programmes of themes that appeal to almost everybody. Whenever one thinks that he has now broken his own record, a few months later, there is another surprise. Always bigger and better. He never fails to surpass himself. It is just a lifestyle.

The selection of music is gorgeous – there is passion, fun, entertainment… you smile, you wipe away a tear, you are transported a million miles away, your heart breaks, and then it jumps for joy. With this CD, you can experience 48 emotions in about 45 minutes – some that you didn’t even know before!

The artistry amongst the performers is simply awesome. They sound like one man, like a small ensemble, and like a full scale philharmonic orchestra. They are all well respected musicians, who have made a name for themselves in a variety of places and genres. Yet, they were mostly newcomers to each other for this CD production. It is remarkable that such a rapport could have established between them in such a short space of time.

The balance is outstanding too. The sound engineer and his assistant have done a superb job.